Thomas Benzing is Professor of Medicine and Chairman of the Department II of Internal Medicine, University of Cologne, and a world-leading specialist for kidney diseases, molecular nephrology and genetics. He received his medical doctor at the University of Freiburg, Germany, and his clinical training and research expertise at the University of Freiburg, the Institute of Cardiovascular Physiology in Frankfurt and at Harvard Medical School in Boston (MA). After serving as Professor of Medicine, Vice Director of the Renal Division and Board Member of the Center for Systems Biology at the University of Freiburg, Benzing moved to Cologne where he is Professor and Chairman at the Department of Medicine. In addition, he is also one of the coordinators of the Cologne Cluster of Excellence on Cellular Stress Responses in Ageing-Associated ­Diseases (CECAD), Director of the Center for Molecular Medicine, University of Cologne as well as coordinator of the Sybacol initiative.

There is an ever-increasing proportion of the ageing population affected by renal disease and hypertension. Although ”normal ageing“ does not necessarily cause dramatic changes in the reduction of kidney‘s filtration rate, a strongly increased incidence of hypertension and a high susceptibility to acute kidney failure are very common findings. For example, more than 30% of the population over the age of 65 present with chronic renal disease (CKD), hypertension or susceptibility to acute renal injury. Importantly, it is now clear that renal damage and CKD are major independent risk factors for cardiovascular morbidity and mortality including stroke, myocardial infarction and heart failure. Thus, age-related kidney disease is among the most important non-neoplastic lesions that affect overall morbidity and mortality in the ageing population. To date, the main causes of age-related renal pathologies are not well understood; however, genetic as well as environmental factors are known to play a role. The Benzing group studies molecular mechanisms of progressive kidney ageing and dysfunction of the renal ultrafiltration units using mouse and Drosophila melanogaster as model organisms. Moreover, the lab also addresses signalling networks in renal carcinogenesis, longevity pathways in C. elegans that are regulated through kidney-expressed oncogenes, and the dynamics of carcinogenesis and ageing. Finally, it also studies the effects of new therapies using molecular systems biology.

The team of Professor Benzing studies the molecular ­basis of kidney diseases focussing on disorders of the kidney filtration barrier, cilia-related diseases and age-related ­pathologies. They have pioneered the concept of signalling at the slit diaphragm, a specialized cell junction at the kidney filtration barrier. Together with collaborating investigators all over the world they deciphered the function of this protein complex and its role in controlling the biology of podocytes, essential structures at the kidney filtration barrier. Moreover, the team has investigated signalling through cilia, sensory organelles that play a role in controlling animal survival and longevity. Seminal studies of the lab have led to the discovery of novel genes involved in controlling the pathogenesis ciliopathies and a variety of age-related kidney disorders. 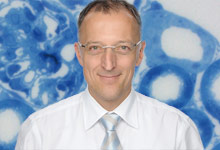 Podocytes are essential components of the kidney filtration barrier and affected in ageing.