“Understanding the basis of ageing in somatic evolution”

Prof. Michael Lässig studied physics in Munich, Rome and Santa Barbara (CA). He obtained his PhD in Theoretical Physics from University of California, Santa ­Barbara, in 1991. He is an internationally recognized expert on equilibrium and nonequilibrium statistical physics. In the last ten years, he has focused on research at the interface of statistical biophysics and molecular evolution. Since 1999, he has held his current position as Professor of Physics at the University of Cologne and since 2007, he is Speaker of the Collaborative Research Center Molecular Basis of Evolutionary Innovations. Lässig currently serves as deputy coordinator responsible for the theory projects of the Sybacol initiative.

Michael Lässig has used biophysical models to explain how the regulation of genes has evolved and has also made ­significant contributions to the statistics of genomic sequences and of complex networks. In collaboration with Johannes Berg, he has developed methods to compare networks and to identify their biologically relevant features. Finally, he is also known for his seminal work on the theory of biological evolution.

To determine the interactions between ageing-related path­ways, the Lässig group in collaboration with the experimental groups is analysing time-series expression data to identify regulatory pathways affecting the process of ageing and their mutual interactions.

To better understand somatic evolution over the lifespan of an individual, this group is also quantifying the complex ­mutational processes characterizing the ageing process. These processes include deleterious mutations affecting, e.g. mitochondrial function, as well as beneficial mutations that prolong lifespan. The ultimate aim of these studies is to produce a clearer picture on the effects of multiple mutations on ageing. 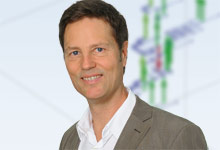 This tree shows the evolution of the influenza virus, a process with multiple beneficial and deleterious mutations. Can we think of the ageing process in a comparable way?