“Modelling signalling of ageing will ­clarify the genetic basis of lifespan”

Prof. Joachim Krug studied physics in Göttingen and Munich, and received a doctoral degree in theoretical physics from the LMU Munich in 1989. After postdoctoral research appointments at the IBM Thomas J. Watson Research Center in Yorktown Heights (NY) and Forschungszentrum Jülich, he completed his habilitation at Heinrich-­Heine- Universität Düsseldorf in 1995, and became a professor of theoretical physics at the University of Essen in 1996. In 2004, he joined the Institute of Theoretical Physics at the University of Cologne. In addition, he has held ­visiting professorships at the Danish Technical University, the Helsinki University of Technology, and the Hebrew University of Jerusalem. Finally, he is the author of more than 140 internationally reviewed publications covering a broad range of topics in statistical and biological physics as well as an Editor of the Journal of Statistical Physics and the Journal of Statistical Mechanics. In 2008, he was named Outstanding Referee by the American Physical Society.

Prof. Joachim Krug has made important contributions to nonequilibrium statistical physics, most notably in the context of random growth processes and stochastic transport. In particular, he discovered the maximum current principle for driven diffusive systems. In recent years, his research has focused on understanding the genetic basis of complex biological adaptations. Combining mathematical modeling with the analysis of empirical data sets, his group has explored the nature and consequences of epistatic interactions between mutations occurring at different genetic loci, as well as the interactions between mutations occurring at different times during the adaptive process (clonal interference).

Within Sybacol, the Krug group focuses on unraveling the interactions between different mechanisms affecting ­longevity in model organisms. In close cooperation with experimental groups, we develop models for the networks of signalling and metabolic pathways associated with ageing, and use them to explore the epistatic and pleiotropic relationships among mutations and different loci within and between path­ways. We expect that this approach will ultimately ­allow us to predict and experimentally test how different mutations – either singularly or in combination – affect lifespan extension and age-dependent mortality. In a broader sense, this group aims to clarify the genetic basis of lifespan and longevity as a complex phenotypic trait. 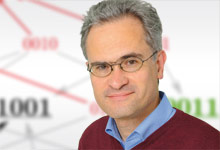 Clonal interference in a simulation of asexual adaptation. Figures show the frequencies of the five most populated genotypes in different colors. Population size increases from upper left to lower right. From  S.-C. Park, D. Simon, J. Krug, The speed of evolution in large asexual populations. Journal of Statistical Physics 138 (2010) 381-410.