Prof. Johannes Berg uses statistical physics to model and analyse information processing in biological systems. He studied physics at Oxford and received his Bachelors in 1995 and Masters in 1996. During his PhD research in Magdeburg, he applied statistical mechanics to problems of game theory. After a period as a postdoctoral research fellow at the International Centre for Theoretical Physics in Trieste, he came to Cologne in 2001, where from 2006 he headed an Emmy-Noether junior research group. In 2007, he was elected to the junior section of the Academy of Sciences Northrhine-Westphalia and also awarded a Mercator Foundation scholarship. He held a position as interrim professor at the Physics Institute of the Albert-Ludwigs University in Freiburg, and today is a professor of theoretical physics at the University of ­Cologne. His work lies at the boundary of theoretical ­physics and quantitative biology with a focus on the statistical ­description of cellular information processing. This research area spans a broad range of statistical physics including stochastic systems, the physics of disordered systems and information theory. 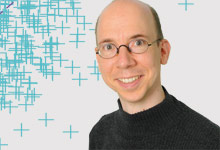 The quality of gene expression levels reconstructed from mixtures of different tissues improves drastically with the number of samples taken. Figures by Nico Riedel.

Inferring the parameters underlying can lead to complex optimisation problems, where a – biologically relevant – global minimum is obscured by a large number of local minima.