Dr. Bianca Habermann studied molecular biology at the University of Vienna focusing early on computational biology. She then did her PhD at the Institute of Molecular Pathology (IMP) in Vienna, where she uncovered the mechanistic details of erythroid cell differentiation. In 2000, she established the Bioinformatic Core Facility at the newly founded Max Planck Institute for Molecular Cell Biology and Genetics (MPI-CBG) in Dresden. In 2002, she switched to the start-up company Scionics, which provides IT- and Bioinformatics support for the MPI-CBG during which time she pursued her own independent research program. Since April 2010, Dr. Bianca Habermann has being leading the Bioinformatics Group at the Max Planck Institute for Biology of Ageing in Cologne. In 2013 Dr. Habermann went to the Max Planck Institut of Biochemistry in Munich. Her position at the MPI-Age and at Sybacol was filled with Dr. Christoph Dieterich.

Dr. Bianca Habermann has been actively involved in estab­lishing esiRNAs (endoribonuclease-prepared, small inter­fering RNAs) as an alternative to the traditional siRNAs for RNA interference in mammalian cell systems. She and her co-workers developed a search algorithm for esiRNAs in transcripts (DEQOR) and are currently providing a resource of predicted esiRNAs (RiDDLE) that is in use world-wide. The Habermann group has also investigated methods to detect and use remote sequence relationships of proteins, creating programs like ProFAT (Protein Functional Annotation Tool) and the HMMerThread database. Further, this group has been actively participating in the analysis of functional and microarray screens in different species, resulting in several high-profile publications together with other research groups.

The Habermann group focuses on data analysis and interpretation within the Sybacol consortium. This group is involved in the data integration of longevity microarray ­studies aimed at identifying ageing-associated pathways and functional modules. Among others, this group combines functional data with protein-protein, as well as genetic interaction data and uses algorithms from network analyses to identify biologically relevant cross-links between genes and pathways. Furthermore, miRNA expression as well as traditional microarray expression data are used to decipher and finally integrate the regulatory role of miRNAs in gene networks. 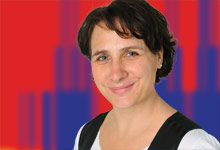 Organisation / Institute
Dr. Habermann is currently at the Max Planck Institute of Biochemistry in Munich

The RiDDLE database developed by the group of Habermann ­contains DEQOR-optimized esiRNAs for the transcriptomes of human, mouse and rat.