The Bioinformatics Core Facility of CECAD Cologne is headed by Dr. Peter Frommolt. He studied mathematics and physics at the universities of Hamburg and Cologne with focus on probability theory and the theory of semiparametric statistics. From 2006 to 2008, he worked at the Institute of Medical Statistics, Informatics and Epidemiology in Cologne where he was involved in the planning and analysis of clinical trials as well as in molecular data analysis. In 2009, he received his PhD on applications of bootstrap methods for multiple hypothesis testing. Since then, he has been a postdoc at the Cologne Center for Genomics where he strengthened his expert knowledge in bioinformatics and its applications to genomics research. In 2012, he started building up a Bioinformatics Core Facility within the Cluster of Excellence „Cellular Stress Responses in Aging-Associated Diseases (CECAD)“ in Cologne.

Dr. Peter Frommolt contributed to the installation of the infrastructure and initiated the data management and analysis solutions for the next-generation sequencing platform at the University of Cologne. The analysis systems he developed have been used in national and international collaborative projects giving rise to several high-impact publications. He developed various tools for in-depth analysis of next-generation sequencing data, e.g. the NGSrich software for evaluation of the target enrichment performance in whole-exome resequencing studies. In cooperation with a CECAD lab, Dr. Peter Frommolt recently developed an innovative approach to molecular pathway analysis in C. elegans implemented as a web-based software called Wormpath.

As a Core Facility, the group of Dr. Peter Frommolt provides support and is actively involved in many collaborative projects within SyBACol and CECAD Cologne. In particular, the facility is developing and continuously refining appropriate analysis pipelines and tools to handle huge amounts of next-generation sequencing data, e.g. from RNA-Seq, ChIP-Seq, or whole-exome resequencing studies. Within CECAD Cologne, these analysis pipelines are mainly applied to model organisms such as mouse, C. elegans or D. melanogaster . An active area of further development is the integration of data sets from different applications of next-generation sequencing and other technologies using relational structures of a tailor-made database.

Within the SyBACol consortium, the Core Facility is involved in projects on the transcriptomics and functional characterisation of renal aging as well as contributing expertise in molecular data analysis to projects on mathematical pathway modelling. 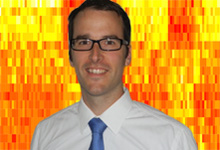 Scheme of data evaluation for next-generation sequencing at the CECAD Bioinformatics Core Facility. A database stores meta-information for analysis control and results, while the actual data processing is carried out on a compute cluster at the University Computing Center (RRZK). The exported data can then be retrieved via a web server. The system is constantly undergoing further development.

In conjunction with a CECAD research group, the CECAD Bioinformatics Core Facility is developing the software program Wormpath for the analysis of genetic networks in the nematode C. elegans. The figure shows a diagram of a signalling pathway in the worm which is upregulated in response to stress. The software tool is organized as a web service and can be accessed via the link bifacility.uni-koeln.de/wormpath.